Chrys is currently the Head of Business Development of Susten, a Private Equity/ VC firm specialising in clean energy Tech. Prior to this appointment, Chrys spent over 20 years in Investment Banking and Wealth Management, in Tier 1 Banks such as Royal Bank of Canada, Credit Suisse, Citi and Deutsche Bank. In her career, Chrys has been advising Institutional and also Private investors in various financial matters such as investment portfolios, wealth structuring and financing. Her expertise lies within Hedge Funds and Private investments. Having worked with numerous successful entrepreneurs, Chrys has a passion for new businesses and has been offering mentorship to a number of European based start-ups in areas of business development, marketing and fundraising. Chrys holds an MBA from University College Dublin and a Bachelor degree in Banking and Finance from the University of Piraeus. 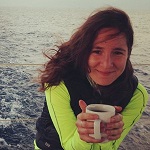 Alexandra Choli is an ecosystem pioneer and early stage tech startup investor. For over a decade she has been working with and investing in ground-breaking tech companies across industries, including healthtech, e-mobility, and edutech, and has founded and operated high-impact ventures in Greece and Europe.

In 2011, Alexandra founded Metavallon, a model social enterprise that spearheaded the formation of the startup ecosystem in Greece, and four years later she launched Metavallon Ventures Limited, a micro-fund and that introduced pre-seed investments and startup acceleration in the country. As such, Alexandra and Metavallon have been featured in publications, including the “Female Entrepreneurship: An Approach to Greek Reality”, and have inspired case studies taught in the Athens University of Economics and Business. In 2018, she co-founded and became a Partner at Metavallon VC, a €32mm venture capital firm investing in very early stage technology companies in Greece and Europe, with the European Investment Fund as an anchor investor in its inaugural fund. Prior to all ventures Metavallon, she worked in operations, management, and business development at several early-stage & small- to medium-sized businesses, both for-profit and non-profit, in Greece, UK, United States, Nicaragua and India.

In recognition of her pioneering work and entrepreneurial achievements the past decade, Alexandra was featured among Fortune’s 40 Under 40 in 2020 and was presented the ‘Entrepreneur of the Year’ Award in 2018 by the British Council. She holds a Masters degree in Mechanical Engineering from University College London and a Master of Business Administration from New York University Stern School of Business, where she specialized in entrepreneurship, social innovation, and strategy.